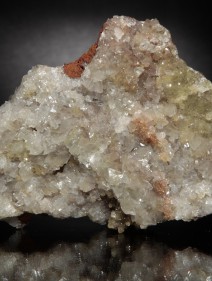 The main crystals and stones used to support one’s physical, mental, emotional and spiritual well-being are chakra crystals. The stones representing these crystals support the basic foundation of gemstone healing and therapy.

Chakras, which are psychically seen, are depicted by vibrational colorized wheels, which rotate at varying speeds. The fastest chakra appears and revolves at the crown of the head while the root or first chakra revolves the slowest and is located at the feet. When all seven chakras are balanced on the body, both health and well-being improve.

Opening and Closing of the Chakras

However, if chakras are opened too much, too much energy can cause short-circuiting, so to speak. Therefore, it is important to learn the proper way to use chakra crystals for healing purposes. If the chakras are closed, the universal flow of energy in the body is blocked, thereby causing a situation which can lead to disease.

Most people will react to an unpleasant experience by blocking out certain feelings. When they react in this way, they also block a good deal of the body’s natural energy flow. As a result, chakra development is affected as well. When an individual blocks out an experience, he can cause his chakras to become closed or disfigured. However, when the chakra “wheels” are rotating as they should, they spin clockwise and create a positive energy flow.

Therefore, imbalances in the chakras can have a significant impact on the body, emotions, mental health or spirit. Chakra crystals, in the form of quartz, are used to effect a positive balance on the body’s chakric center, thereby normalizing energy flow.

Chakra Crystals and gemstones are helpful in healing because they produce, scientifically, what is known as a piezoelectric influence. Modern quartz watches also display this type of effect. Chakra crystals respond to the body’s electricity. If the energy is slow-going, then the electrical vibrations from the crystals or stones act to stimulate, harmonize and balance everything out.

As mentioned, seven major chakras are used in chakra crystals therapy. The first chakra or root chakra is located on the body at the base of the spine. This point covers the pubic bone in front and the tailbone in the back. The root chakra holds the foundational needs for safety, survival and security. If you are trying to effect changes in the material world then, this first chakra can be used toward that purpose.

If the root or first chakra is blocked, it is because a person is feeling frustrated or anxious. In turn, medical issues can result in the form of anorexia, obesity or knee ailments. Root body parts covered by the first Chakra involve the legs, hips, sexual organs and lower back. Colored crystals used for healing include brown, black or red.